Well, the 13 Days Of Christmas Campaign Against Child Abuse and Domestic Violence has started again.

Derringer is a philanthropist here in Toronto and is on the Board of Directors of the Canadian Center for Abuse Awareness.

This fund raising campaign is on behalf of both CCAA and the Martin Kruze Memorial Foundation.

Child Abuse of all kinds, Bullying and Domestic Violence are terrible crimes.

It's up to us as a society to help, to be aware that there are other children out there suffering, and make these children, as well as adult survivors of Child Abuse and victims of Domestic Violence a priority.

Please note that Domestic Violence is not a gender issue. Both men and women can be and are victims. We don't have good statistics on the number of men who are abused because men don't report this crime out of embarrassment and a lack of social support.

His Campaign will continue from December 1 to 13.

Support his campaign by:

2. go directly to their web site at Q107, listen to the show on streaming audio. John's show, Derringer in the Morning, airs from 5:30AM to 10:00AM EST Monday to Friday. John provides details on how to contribute by texting and regular updates, etc.

3. contribute directly and/or participate in the Online Auction  or by going directly to the CCAA site.

4. Or contribute to your own charity in your own country which is helping the victims of child abuse and/or domestic violence! 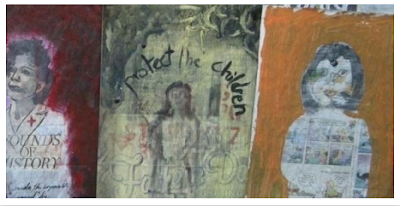