All my recent posts have been related to Child Abuse because this is Prevention of Child Abuse month in Ontario. This is my contribution.

Child Abuse of all kinds is a terrible crime.

It's up to us as a society to put an end to it. To forget your agendas, look deep into the eyes of these children, be aware that there are other children out there suffering, and make these children, as well as adult survivors of Child Abuse the priority. 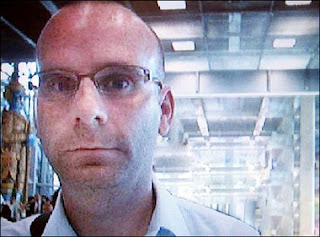 IMAGE DISTRIBUTED BY INTERPOL
Canadian Christopher Paul Neil, 32, a teacher and alleged pedophile, is on the run from Interpol. He is suspected of being in Thailand. He was identified recently, by Interpol, as being responsible for hundreds of images on the Internet showing him sexually assaulting young boys in South East Asia.

If you see him, Interpol asks that you contact your local police service and not interact with him.

UPDATE: He's been located and arrested.

Well, some interesting things have come to light, at the end of last week, regarding the Cornwall Public Inquiry.

My concern is that there appear to be various agendas at work in this particular case. While all the agendas claim concern for the victims as their motivation, I'm not entirely sure that's the case, and frankly, it's a sad state of affairs for the victims.

Since I don't know any of people, organizations, their characters, their motivations, it's impossible for me to say who's right and who's wrong based on anything but the facts that I see spelled out for me.

However, in this case, everyone claims to have the facts, and yet, a lot of the key facts, to some extent have been discredited. I can't comment on the specific Victims statements and whether they have or have not been discredited because I haven't read everything posted yet.

In Perry Dunlop's situation, it's really hard to tell whether he's having problems now because he was a whistle-blower, or whether they are caused because he became overzealous in his and his brother-in-law's independent investigation of the case. One victim states he was pressured by Mr. Dunlop to falsely claim he was abused by someone. Is it true? I don't know, and frankly, it would be difficult to prove for certain one way or the other.

Generally speaking, I believe that, under normal circumstances, most OPP officers are quite professional, very concerned about child abuse, and would have done a thorough and proper investigation. The fact is that over 100 charges were laid. Can we really hold the OPP responsible for the fact that there were no convictions?

My questions to the Inquiry are simple.

Why was there only one conviction, when the OPP laid so many charges?

Why did it take Perry Dunlop's exposing this to get it investigated?

Regarding Mr. LaRoue's Affidavit. Were the victims at the parties identified and did they confirm his statement?

Is it true that some of the perpetrators were considered "above the law" and were not charged and if charged were not convicted for that reason? On the same vein, were those perpetrators well connected enough that they were able to put political pressure on the OPP and influence the results of the investigations?

Giving reasons that "make sense" should not be enough in this Inquiry. People, on all sides, should be required to provide proof that the reasons given are legitimate.

And ... I've decided not to comment further on the case, other than to say, that I wish the victims well, and when all is said and done, I hope they get justice, despite all the other agendas at play here.

A Pedophile Ring In Cornwall

In 1992, a young man came forward to report a case of child abuse.

He was the victim, and all he wanted was an apology from his church.

Over the years, this case has exploded into a politically charged scandal involving dozens of victims, and very prominent members of the Cornwall community and local Catholic Church.

Claims of conspiracy and cover up against top level politicians and police at the provincial level have been made.

The former Ontario Provincial Police Officer, Perry Dunlop, who exposed the goings on in Cornwall, sacrificed his career, endured death threats and other harassment against both him and his 6 year old daughter, was charged and then exonerated under the Police Services Act. His crime? Doing his job to protect the children of Cornwall.

Perry Dunlop should be commended and rewarded for doing his job exceptionally well.

A Public Inquiry into all of this was started in February 2006 and continues today.

The Cornwall Public Inquiry - unofficial site
This site was set up by the Victims Committee and contains background information, affidavits, etc. on the Cornwall Child Abuse scandal.

The Cornwall Public Inquiry - unofficial blog
Blogging the Inquiry as it occurs.

It's purpose is to draw attention to the very serious problem of child abuse in the province.

Emotional Abuse: constant yelling and put downs targeting the child's self esteem.
Physical Abuse: extreme physical punishment for minor infractions often resulting in physical injury.
Sexual Abuse: sexual manipulation of children by pedophiles.
And frequently a combination of some or all of the above.

All forms of abuse create intense stress in children and can sometimes lead to mental illness, or at the very least severe emotional problems.

Child abuse scars children for the rest of their lives.

It often occurs in homes where one parent is also being abused by the same person abusing the child.

The resources required to help heal and support these devastated families are phenomenal, and scarce.

When abusers are reported and convicted, the sentences are so short that they are free to continue abusing for years. Some Pedophiles in particular have been known to abuse hundreds of children in their lifetime.

In my opinion, the best way to prevent child abuse is for the public to get involved and report it; to give significantly longer sentences to those people who are charged; and keep the pedophiles in jail for life.

We also need to increase the resources available to provide the families of the abusers the support and resources they need to heal and move on with their lives.

By doing this we show that we value our children.

Jim Crow still lives in the American South - Digg this and free the Jena 6!

In the small highly segregated rural Louisiana town of Jena in 2006, Six black students were charged with attempted second degree murder for defending themselves against a white student who had been racially taunting them. The weapon they used, according to the prosecutor? Their shoes. The jury? All white. When will Jim Crow die in America?

Jena 6 - Justice For All

"Injustice anywhere is a threat to justice everywhere"

Well, the Jena 6 controversy seems to be surprising a lot of people. Why?

It certainly wasn't a surprise to me.

We've deluded ourselves into believing that discrimination no longer exists in our world.

Well, guess what people. It does. And before you Canadians out there get all self-righteous, it's not just an American problem. It exists here in Canada too and is just as malicious.

Now before anyone starts screaming about reverse discrimination, I don't agree with what the black kids did. It was clearly wrong and they shouldn't have done it. I'm just putting it in context.

What are the claims that the black community are making?

If a black kid does something they are charged under the fullest extent of the law.
FACT: The white victim of the beating and his parents claim that he was beaten to within an "inch" of his life.
FACT: He was released from the hospital after two hours and attended a social event immediately after.
FACT: Attempted murder charges reflect the fullest extent of the law. The charge was changed but it was still more serious and involved defining the kids' white runners as lethal weapons???

The charges could have been simple assault, or the school could have chosen to intervene anytime, and in such a way that justice was served, in an effort to prevent this reaction by the black kids.

My question is: Why didn't the school intervene immediately? Did it not occur to them that the creation of a "White" tree would provoke the black kids, particularly when it had nooses hanging from it? Just like it would provoke Jewish kids if swastikas were found hanging from the tree.

Or, Perhaps they simply didn't care ... until a white kid was injured.

The very clear message they are sending here, is that it's okay for the white kids to commit Hate crimes, but it's not okay for the black kids to have a problem with it.

The Jena 6 have the right to equal treatment under the law and in the school system. This is a legislated legal right.

In my opinion, all the kids, black and white should be properly disciplined by the school for their behavior.

However, it's the School Board and the Town who should be charged for:

1) Allowing a Hate Crime to occur and not acting on it.

2) With Assault since they were the ones who created the conditions for the assault to occur.