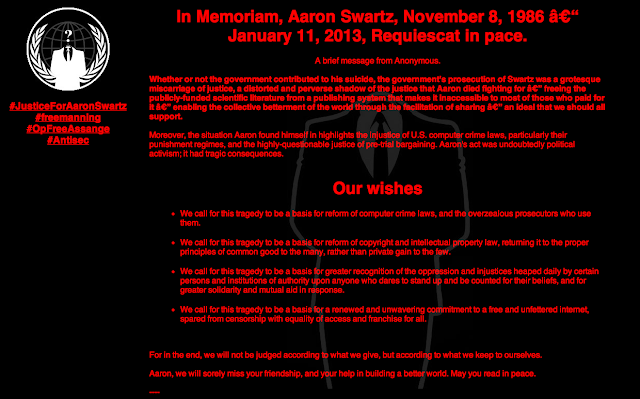 Official Statement from the Family and Partner of Aaron Swartz:

Our beloved brother, son, friend, and partner Aaron Swartz hanged himself on Friday in his Brooklyn apartment. We are in shock, and have not yet come to terms with his passing.

Aaron’s insatiable curiosity, creativity, and brilliance; his reflexive empathy and capacity for selfless, boundless love; his refusal to accept injustice as inevitable—these gifts made the world, and our lives, far brighter. We’re grateful for our time with him, to those who loved him and stood with him, and to all of those who continue his work for a better world.

Aaron’s commitment to social justice was profound, and defined his life. He was instrumental to the defeat of an Internet censorship bill; he fought for a more democratic, open, and accountable political system; and he helped to create, build, and preserve a dizzying range of scholarly projects that extended the scope and accessibility of human knowledge. He used his prodigious skills as a programmer and technologist not to enrich himself but to make the Internet and the world a fairer, better place. His deeply humane writing touched minds and hearts across generations and continents. He earned the friendship of thousands and the respect and support of millions more.

Aaron’s death is not simply a personal tragedy. It is the product of a criminal justice system rife with intimidation and prosecutorial overreach. Decisions made by officials in the Massachusetts U.S. Attorney’s office and at MIT contributed to his death. The US Attorney’s office pursued an exceptionally harsh array of charges, carrying potentially over 30 years in prison, to punish an alleged crime that had no victims. Meanwhile, unlike JSTOR, MIT refused to stand up for Aaron and its own community’s most cherished principles.

Today, we grieve for the extraordinary and irreplaceable man that we have lost.
_____

Aaron’s funeral will be held on Tuesday, January 15 at Central Avenue Synagogue, 874 Central Avenue, Highland Park, Illinois 60035. Further details, including the specific time, will be posted at http://rememberaaronsw.com/, along with announcements about memorial services to be held in other cities in coming weeks.

Remembrances of Aaron, as well as donations in his memory, can be submitted at http://rememberaaronsw.com/