A New Year and a New Era of Civil Rights

This blog post was originally posted on New Years Eve, 2012 for 2013. I believe that my comments are as relevant today as they were then, so I've decided that it's worth repeating my post this year. Hope you agree. In my opinion, humanity is standing on the precipice of something very significant, very new and as yet undefined. I believe that this New Civil Rights movement is the inspiration for the launch of the new. Added some additional points.

The last few years have been interesting ones for those of us who are paying attention to what is going on around us.

There has been a rising tide of mass movements around the world, the core demands of which have centered on rights irrespective of the political orientations of various groups, left, right or middle.

There has also been an opposing trend from the wealthy elites and the governments and states which they have purchased through corruption and the undermining of democratic processes. This trend has focused on repressive legislations, violent suppression of and criminalization of legitimate dissent and dissenters as well as criminal collusion between government and corporations to rob the taxpayer.

“It is from numberless diverse acts of courage and belief that human history is shaped. Each time a [person] stands up for an ideal, or acts to improve the lot of others, or strikes out against injustice, he sends forth a tiny ripple of hope.”

American history is resplendent with great men and women who provided this type of inspiration to their populace and encouraged every man and woman to stand up against tyranny and injustice. The Constitution was designed to ensure the will of the people over-rode the will of the government or political, social, corporate elites.

The European Rationalists from the historic Age of Reason: Locke, Voltaire, Rousseau, Newton stood on the shoulders of the great Greek rational thinkers of ancient times and had much in common with Carvaka, an Indian atheist and materialist philosopher from the 7th century BCE.

Inspired by the Rationalists came Americans like Thomas Paine who in turn inspired the American Revolution and Americas Founding Fathers.

It’s on the shoulders of people like these great men and women of the past, that the 1960s civil rights movement was born and now this new era of Civil Rights has been born.

It’s those who have taken up the new flag of liberty that has been handed to them from those echoes of our past that are the strength and foundation of the Civil Rights era of the new millennium. People like Julian Assange, Edward Snowden, Jacob Appelbaum, Bradley Manning, Barrett Brown, Anonymous, WikiLeaks, Occupy, Idle No More and many others.

Not all on the list are known individuals. Some are nameless, faceless, and leaderless and this has become a key and component part of this New Civil Rights era.

Perhaps that’s because we learned not to idolize individuals or perhaps it’s because we know that our leaders will be targeted to destroy and disrupt our mass movements.

It doesn’t really matter why this new type of mass movement came into being except perhaps to some Ivory Tower academics.

What matters is that it has happened and with it has come the concept that it’s the issues not the political spectrum one belongs to that matters. This is the second key and component part of this New Civil Rights era.

The issues were nicely outlined in the recent CypherPunks book, CypherPunks: Freedom and the Future of the Internet by Julian Assange with Jacob Appelbaum, Andy Muller-Maguhn and Jeremie Zimmermann.

While segments of all of these movements push for specific interests, all of their causes and issues whether they are environmental, social, etc. can be boiled down to issues of Freedom and Civil Rights, when one examines why these problems are occurring. The specifics of this are for another blog post.

There are two aspects to this battle:
Both aspects are under attack by the Corporacrats/wealthy elites and the governments/states that they have purchased through treasonous (dictionary  not legal definition) means like buying politicians and political parties as well as undermining democratic processes and our Constitutions around the globe.

Full Definition of TREASON
1 :  the betrayal of a trust :  treachery
2 :  the offense of attempting by overt acts to overthrow the government of the state to which the offender owes allegiance or to kill or personally injure the sovereign or the sovereign's family

Now, I can’t speak for anyone else but I consider active interference in elections (like that which Hillary Clinton engaged as demonstrated by her emails) to get certain people or parties elected an attempt to “overthrow the government”. I think one “betrays one’s country” when one advocates for and represents special interests (both internal and external) at the expense of the Canadian people and when one is elected for the purpose of representing the Canadian people. It’s also fraudulent misrepresentation. I consider this a criminal act and those who engage in this should not be above the law simply because they are members of the wealthy elite or corporatocracy or have been bought by them.

In fact, I would like to see the legal definition of Treason changed around the world, to one that is along the same lines as the dictionary definition.

So, we are walking into an era which is marked by the treasonous overthrow of numerous governments by people who are betraying our countries with impunity and using those illegal governments that they purchased to suppress legitimate dissent which is drawing attention to the other criminal acts being committed against us.

Criminal acts such as stealing billions of dollars of hard-earned tax payer funds to line the pockets of the corporate/wealthy elites in the form of corporate welfare, while impoverishing the tax payers further through the theft of funds from the social safety net and pensions; allowing the corporacrats and wealthy elites to rob the tax payer by engaging in billions of dollars worth of tax evasion with impunity; State/government criminal collusion with the corporatocracy to manipulate the economy, banks, etc. with impunity; inteference in the financial matters of citizens on the false grounds that everyone is a potential terrorist/criminal; illegal and criminal invasions into and the disruption of the lives of innocent citizens; etc. etc. etc.

Of course the corporatocracy wants to prevent legitimate dissent and exposure of these criminal acts. The only way they can do that is to ensure that the governments/states that they have bought and paid for implement repressive measures on the false grounds of terrorism and use those false grounds to silence those voices of dissent through both legal and illegal means. Much like they did during the COINTEL PRO (US) and RCMP Red Squad wrongdoings (Canada) eras. The strategies developed by these corrupt programs are being reintroduced again.

This was most obvious during the G8/G20 Summits in Toronto, Ontario, Canada and the actions taken against demonstrators there as well as the treatment of Occupiers in Oakland, California, US.

The detention of at least one member of the US Military on false claims of alleged “mental illness” for simply writing a rational and coherent statement of dissent shows that our states/governments are sinking to new lows and showing more than just one sign of moving towards open world-wide fascism.

The treatments of Julian Assange, Edward Snowden, Jeremy Hammond, Aaron Schwartz, Bradley Manning, Barrett Brown, et al (the list grows longer by the day) by various governments indicates an International criminal collusion of fascism and highlights the fact that these are global and not regional issues.

The apparently coordinated efforts to pass legislation similar to the NDAA and SOPA/ACTA in numerous countries around the world as well as at the international level (TPP/TISA) are also an indication that this is a global issue and not a regional one.

The malicious persecution of hundreds of thousands of innocent individuals around the globe some of whom are whistle-blowers, social activists, inventors and many of whom are people who have no idea why they’ve been targeted for this abuse is another sign.

The strategies used in these cases are ones that were developed by organizations like the German Stasi and the KKK. They have been updated and refined by organizations like Palantir, HBGary, etc. This is the case no matter what methods are used involving illegal acts by corporations producing these often experimental technologies involving intentional medical malpractice and murder by physicians and sometimes other parts of the health system, psyops involving intentional psychiatric malpractice by psychiatrists, gaslighting, disinformation and smear campaigns often involving illegal and criminal acts by state personnel, civil servants, elected officials, etc. and much more. The medical, psychiatric personnel and public servants engaging in these activities as well as torture in places like Guantanomo are violating their ethics and responsibility towards citizens.

“The cost of freedom is always high, but Americans have always paid it. And one path we shall never choose, and that is the path of surrender, or submission. “

I don’t doubt for one second that the corporatocracy sees legitimate dissent, constitutional restrictions, and democratic structures as terrorist threats since they certainly are a threat to their corruption and ability to engage in the commission of crimes with impunity.

However, it’s far more accurate to say that the corporatocracy itself is treasonous and they should be held accountable for that and their other criminal acts.

To the governments, corporacrats and wealthy elites of the world:

The people of the world are saying: “Expect us. We are not afraid. You should be.”

And I’m saying: I want “transparency of the state, corporations and wealthy elites; privacy for the people; accountability and justice for everyone and no-one is above the law.”

We all have much in common irrespective of our political, social, cultural, religious beliefs and that is what this new era of Civil Rights is all about. 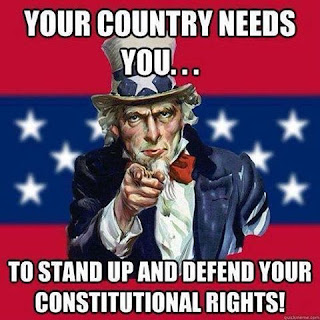 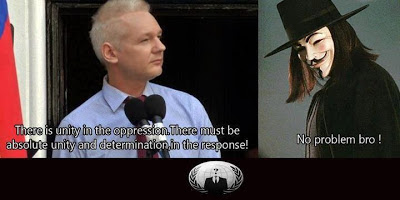 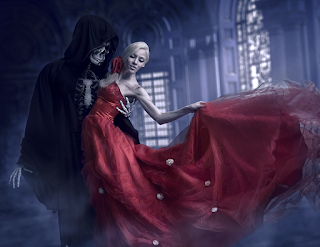 V: Would you... dance with me?
Evey Hammond: Now? On the eve of your revolution?
V: A revolution without dancing is a revolution not worth having!