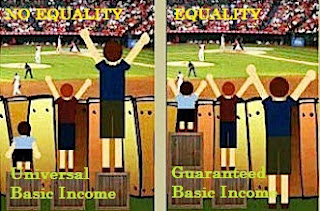 What is a Universal Basic Income?

Everyone, irrespective of need or income, gets a cheque of the same amount (working or not and including the 1% wealthy elite and upper middle classes - 150K+). This is pointless, expensive and unsustainable. Why?

Less money goes to the impoverished. Current proposals (like Finland) actually reduce the income and benefits which those living in poverty currently receive, while putting additional money in the hands of those who don't need it and will NOT spend it on goods and services. Therefore there is no boost to the economy because the poor are still living at the subsistence level with even more hardship.

What is a Guaranteed Basic Income?

Those below a LIVING income level are the only ones who receive it and it's graduated as you reach the living income level. Everyone is eligible to receive it but only those who qualify by being below the set income rate receive it.

$40K in Toronto, Canada, where I live would restore a persons purchasing power to what we had in the 1950s with a minimum wage. This results in the money paid out, being spent on goods and services which is what the economy needs in order to restore itself.

The entire welfare system could be scrapped. The money is guaranteed based on income level which could be administered by the Tax departments since it's only a question of sending out a cheque based on current income. This alone would result in huge savings making money available for the BGI.

Full benefits such as health, prescription, eye and dental care could now be provided for free to BGI recipients as well as a tax free status because that would also be affordable and it would maintain and enhance the social service benefits people currently get.

THIS design is affordable, will put money in the hands of the people who actually need it which will result in a boost to the economy especially if the taxes are increased on the Corporations and the wealthy elites.

Those Trillions currently in offshore bank accounts are not contributing anything to the economy.

To those who think the poor are lazy and greedy and 'will take advantage', let me just say that the Welfare Fraud rate in my province of Ontario is 4% while over 60% of Corporations in Ontario have either not paid tax by 'taking advantage' of tax law grey areas, evaded paying taxes owed, or engaged in tax fraud. How could this possibly occur without the active collusion of the provincial and federal government? Now tell me again who the lazy, greedy, fraudsters are. The facts speak for themselves.

In addition, an experiment was conducted in Canada in one town where people received the GBI for 5 years. This experiment was successful, and there was no indication of any problems of 'laziness and greed.' This is just another reason why this payment should NOT be Universal but rather targeted to those living in poverty and raising their income to a living income with benefits and a tax free status.

The entire point of this program is to solve the problem of economic inequality and kick start economies by providing the poor with additional purchasing power.

Someone described it as a Trickle Up effect. The GBI design I have described will have this effect and address this problem. The Trickle Up effect offers a real benefit to the corporations as long as they don't gouge. Allowing corporate gouging will eliminate any benefit over the longer term and we'll end up right back to where we are today.

A UBI will do nothing to solve either the problem of income inequality or increasing the purchase of goods and service. However, MSM, the politicians, and their Corporate masters can all pat themselves on the back and talk about how they tried but they can't continue because it doesn't work, is unaffordable, and unsustainable. This, of course, is something we already know and it isn't what people have been asking for. It's the MSM and Politicians spin on it as well as various economists. You know, the ones that used the Trickle Down nonsense to justify the creation of the corporate welfare bum scam of handing out billions of taxpayer dollars.

Given the demonstrated, repeated problem with Corporate Gouging (price increases based on 'what the market will bear' rather than what is a reasonable profit margin will become a problem which will also need to be addressed to avoid inflationary costs in the areas of food, clothing, transportation and shelter.

This could be addressed by establishing regulations on how prices are set. Or, it could be addressed by tying increases in the GBI directly to price increases in food, clothing, shelter, and transportation only. Those are the prices that will have the greatest impact on the purchasing power of those receiving the GBI. If increases in those prices are directly reflected in increases to the GBI any damage from greedy corporate gouging can be mitigated in those key areas. Tying increases to COLA or general inflation are useless because those rates are usually much lower than the real inflation experienced by those whose purchasing power is low in the first place. We've seen the result of this already. None of our social services benefits, pensions, etc. have kept up with increases in those critical areas and that's been a huge part of the problem.

In the 1950s, the Corporations and wealthy elites paid 90% of their income in taxes and lived extravagant and luxurious life styles. That tax rate level didn't hurt them. They now pay far less, if anything and have become Corporate Welfare Bums receiving billions in handouts paid from the taxpayer purse. They no longer need to run competitive, productive companies which offer quality goods and services.

In addition, it was this tax money we used to provide tax payer services, social services, education, health, etc. and build our infrastructure and maintain it. It's this tax money we've lost which is resulting in the crumbling of our infrastructure today, the creation of fee-based taxpayer services, draconian cuts in social services, education, health, etc. Increasing the taxes on the Corporations and wealthy elites will also allow us to restore those services and rebuild this aging infrastructure, which will provide jobs and reduce the number of people who require the GBI.

Ending corporate handouts will force corporations to run competitive, profitable companies which provide quality goods and services or go out of business if they can't cut it. Instead of corporate handouts, the money is distributed to the unemployed through the BGI. They can either use their experience to recreate a more profitable version of the business or move on into other areas of interest. 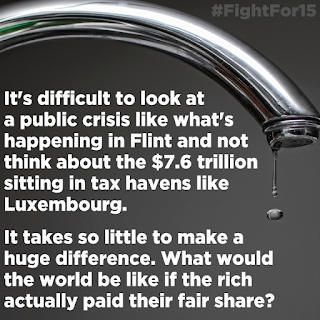 It's time to END Socialism for the Rich in the form of handouts and tax breaks and turning a blind eye to their tax frauds. They should be taxed appropriately in accordance to their income. The higher the income, the higher the taxes. 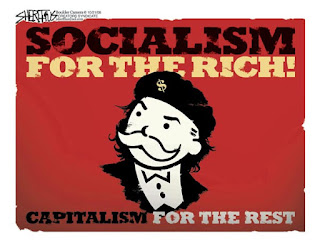